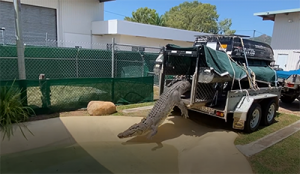 The large male croc has been transported to the DES holding facility in Townsville.

Wildlife officers from the Department of Environment and Science (DES) have captured and removed a 3.8 metre estuarine crocodile from the Herbert River at Cordelia, near Ingham, North Queensland.

On 4 February 2022, DES received a report of a large crocodile in the area that had become increasingly aggressive and had approached people at the riverbank at least twice within the previous month.

Following an assessment of the report, DES declared the animal a problem crocodile that same day and set a baited trap in the river.

The section of the Herbert River where the crocodile was sighted is in Zone E (general management zone) under the Queensland Crocodile Management Plan, which means all declared problem crocodiles are targeted for removal.

On Saturday, February 12, the 3.8 metre male crocodile was captured and transported to a DES holding facility in Townsville.

The croc appears to be in good health and will be made available for placement at a registered crocodile farm or zoo.

All crocodiles that pose a threat to human safety are targeted for removal under the Queensland Crocodile Management Plan.