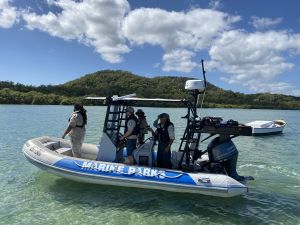 Rangers are continuing the investigation following at crocodile sighting report at Minjerribah. 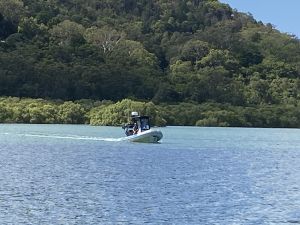 Rangers are continuing the investigation following at crocodile sighting report at Minjerribah.

The Department of Environment and Science (DES) has resumed the investigation following a crocodile sighting report at Minjerribah (Stradbroke Island).

Vessel-based spotlight surveys conducted last night did not reveal any evidence of the presence of a crocodile.

Three vessels are currently searching waters on the eastern side of the island, and rangers are also using drones.

The Queensland Parks and Wildlife Service has flown two experienced crocodile management wildlife officers from North Queensland to assist in the investigation.

Visitors and residents on Minjerribah are urged to stay away from the search area for safety reasons, and to allow rangers and wildlife officers to complete their investigation.

Members of the public are asked not to launch private drones on and around the island while the investigation continues.

Crocodile sightings can be reported to the department through the QWildlife app or by calling 1300 130 372.

It is important that all crocodile sightings are reported in a timely manner.

Under the Queensland Crocodile Management Plan, Minjerribah is in Zone F (Atypical Habitat Zone) that is not typical habitat for crocodiles and beyond their typical southernmost extent.

This means that any crocodile confirmed to be present on Minjerribah, regardless of size, is targeted for removal from the wild.

A key finding from the department’s Queensland Estuarine Crocodile Monitoring Program 2016–2019 found the distribution of crocodiles in Queensland has not changed over time, and found no evidence of a southward expansion of their range.

The Department of Environment and Science will continue to provide updates to the public as any new information becomes available.