The fire almost escaped into bushland, where it could've become a bushfire. 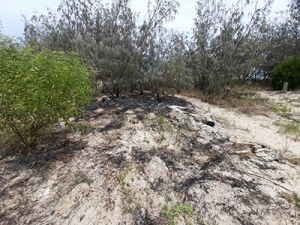 Campfires at Double Island Point are banned to prevent bushfires.

Another unlawful campfire at Double Island Point by campers without a permit, and another bushfire narrowly avoided.

Senior Ranger Col Lawton said an illegal campfire was lit on the night of 1 February or the morning of 2 February and escaped into the bush.

“Just days after a man was fined for an unlawful campfire on K’gari and we had an alleged arson incident on the island, we’ve had another campfire lit by irresponsible people.

“The campfire escaped into the bush north of Leisha Track at Double Island Point, and high tides hampered access, but rangers got to the site on foot.

“They found an abandoned campsite and an unauthorised campfire still smouldering and spreading into nearby bushland.

“With the assistance of other campers and people on boats on the lagoon, QPWS rangers extinguished the fire and prevented it from escaping further into the bush.

“Rangers believe the people who lit the campfire were camping without a permit, and they were burning a QPWS bollard along with wooden pallets and rubbish.

“In the afternoon, when the tide was out, rangers took a fire vehicle to the site and thoroughly raked and wet the fire bed down to prevent any ignition from any potential underground embers.”

Mr Lawton said rangers had issued Penalty Infringement Notices recently to people who were camping without a permit near the Leisha Track.

“People need to follow the rules, and that means camping permits, vehicle access permits and not lighting unlawful campfires,” he said.

“Our national parks have high ecological, cultural and conservation values and campfires are banned to protect those values and prevent bushfires.

“Anyone with information about the people who were camping near the Leisha Track and lit the campfire is asked to contact the department on 1300 130 372.

“The maximum fine for an illegal campfire is $689, and rangers take a zero tolerance approach to people who disregard the rules.

“Rangers have seen too many campfires become bushfires, and a single campfire can burn through thousands of hectares of national park.

“This not only damages the national park, but it puts the lives of rangers, QFES officers and fellow campers at risk.

“Most visitors to Teewah and Double Island Point do the right thing, and we’re asking people who want to behave like an imbecile to consider the environment, their fellow campers and their hip pocket.”

Photos and videos of the fire are available from our Media Centre.