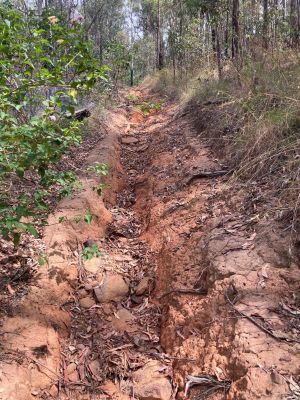 Rangers have issued 25 Penalty Infringement Notices (PINs) during a crackdown on unlawful behaviour, including fines to two men who were hunting in the Lockyer National Park.

Senior Ranger Compliance Luke Male said the majority of visitors to Lockyer State Forest, Lockyer National Park and Crows Nest National Park were doing the right thing, and rangers were disappointed with the number of PINs that had to be issued.

“The safety of visitors and staff in our national parks and State forests is our number one priority, and we  have no tolerance for those who jeopardise the safety of others,” Mr Male said.

“The hunters were carrying knives, riding unregistered quadbikes without helmets and had brought dogs with them into the national park.

“Their dogs were fitted with GPS trackers so they could be followed into the bush, and they made full admissions that they were hunting and were each issued with PINs totalling $717.

“The use of unregistered trail bikes continues to occur in Lockyer National Park and Lockyer State Forest.

“We have taken an educational approach with offences in our national parks and State forests, but the time for that approach is over.

“The 25 PINs we issued recently totalled $7,625, and we make no apologies for our enforcement action, in maintaining public safety and preventing damage to our national parks.”

Mr Male said people who bring dogs or ride unregistered vehicles in national parks and State forests are disrespecting other visitors, park neighbours and the environment.

“In some cases, they don’t have respect for their own safety, and we issued two $575 PINs to two people who entered and swam in a waterhole that is closed to the public at Crows Nest National Park,” he said.

“People have died or been seriously injured at the falls, and there is a high risk of rock fall which is why they are closed to the public.

“Anyone with information about illegal activities in our national parks and State forests can report it anonymously by calling 1300 130 372.”