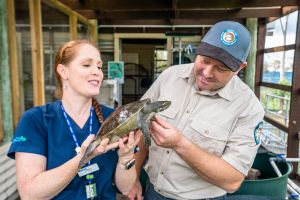 Jaimee Blouse and Cameron Wregg with a surrendered turtle.

What those owners don’t often talk about is the permits they need to keep freshwater turtles as pets, especially if they don’t have them.

Queensland Parks and Wildlife Service (QPWS) Manager Wildlife and Threatened Species Operations Frank Mills said World Turtle Day is a celebration of the prehistoric animals who have been around more than 220 million years.

“Unfortunately, many of Queensland’s turtle species are threatened due to habitat destruction, feral animal predation or being unlawfully removed from the wild.” Mr Mills said.

“On World Turtle Day, I’d like to remind people that taking a turtle from their natural environment can threaten the conservation of the species.

“Capturing them from waterways is illegal, and you should only purchase a turtle from a licensed seller if you're planning on keeping one as a pet.

“Unfortunately, turtles are often sold by people or over the internet without the necessary permits, and any native animal sold without permits becomes a part of the illegal trade of native wildlife.

“The illegal trade of native wildlife is a serious problem in Queensland and internationally, and if someone offers a turtle for sale without permits, that animal may have been illegally taken from the wild.

“It is up to the buyer to check that the seller has the necessary permits, and if they don’t then it’s buyer-beware and they should walk away.”

The RSPCA’s Wildlife Operations Manager Jaimee Blouse said a lot of effort goes into caring for turtles the organisation receives.

“We get turtles from QPWS, we get turtles surrendered by members of the public who drop them off to us or at vet clinics, and we get them through our compliance activities,” Ms Blouse said.

“All turtles that come into the RSPCA get a full vet check which includes blood tests, x-rays and a head-to-toe examination and a microchip before they’re put in quarantine.

“While they’re in quarantine we make sure they’re eating, they’re bright and alert and if they pass all their vet checks when quarantine is complete, we put them up for adoption and they find their new forever home.

“We encourage people to buy turtles from licensed dealers or from us, because we make sure the buyer has the correct enclosure and permits before they can get the animal.”

Mr Mills said wildlife officers have zero tolerance to the illegal trade of wildlife or people who keep turtles without the necessary permits.

“QPWS get many calls from members of the public who are concerned about people keeping turtles illegally,” he said.

“Wildlife officers work closely with the RSPCA and we rescue too many turtles from unlicensed Queenslanders each year.

“Those turtles are generally surrendered to the RSPCA to be rehomed but unfortunately a number of them are euthanised if they are sick, injured or carrying a disease.

“People not only lose their pet, but they can also receive a $689 Penalty Infringement Notice for keeping a turtle without a licence.

“Before buying a turtle as a pet, do your research as they do require special care, and check the seller’s licence is fine or you will pay a fine.”