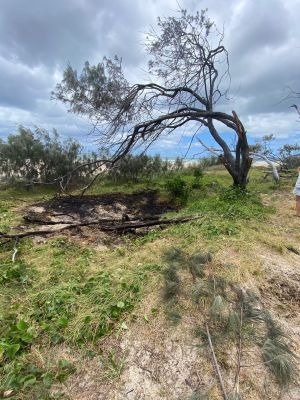 Site of unlawful campfire at the Marloo camping area.

Swift action by the Queensland Parks and Wildlife Service (QPWS) and the Rural Fire Service (RFS) has prevented a potentially devastating bushfire near the Marloo camping area in the northern end of K’gari (Fraser Island).

The Department of Environment and Science (DES) is investigating the circumstances surrounding the fire, and considers it to be deliberately lit.

“Around midday, rangers were advised the Orchid Beach RFS were heading to the Marloo region where a bushfire was burning,” Mr Cody said.

“When rangers and the RFS arrived at Marloo, they found a fire about the size of a four-wheel-drive burning in the bush and were thankfully able to extinguish it.

“The RFS officers believed the fire was deliberately lit with the intention of causing a bushfire, as it was located in the bush and not on the beach or near the dunes.

“It is extremely disappointing that an alleged incident of arson has occurred on the island, and anyone with information is urged to contact QPWS on 1300 130 372.

“I’d like to thank the Orchid Beach RFS for their professionalism and diligence in preventing an uncontrollable bushfire by making sure the fire was fully extinguished.”

Mr Cody said campfires were unlawful on K’gari except in designated areas, and visitors and residents should not break the rules.

“Campfires are only permitted on K’gari in the fire rings at Dundubara and Waddy Point camping areas,” he said.

“This helps prevent bushfires, stops inappropriate items being burned and reduces injuries caused when people step on hot campfire embers and broken bottles or crushed cans that have been covered in sand.

“The ban also keeps people and infrastructure safe and protects areas of cultural significance for the Butchulla people, including the island’s unique flora and fauna.

“QPWS rangers take a zero-tolerance approach to illegal campfires on K’gari, and since 1 January 2021, rangers have issued 55 fines to people who lit unlawful campfires, and we have issued four fines already this year.

“People who break the rules and light unlawful campfires on K’gari will be issued with a $689 PIN.

“Lighting campfires on the beach or in camping areas is unlawful for a reason, and it is dangerous, risky behaviour, especially if people try to extinguish them with sand.

“The embers can smoulder beneath the sand and can ignite the root systems of nearby vegetation hours later, which is how the 2020 K’gari bushfire began.

“Visitors and residents to the island are warned that people routinely provide information, including photos, when irresponsible people light campfires.”