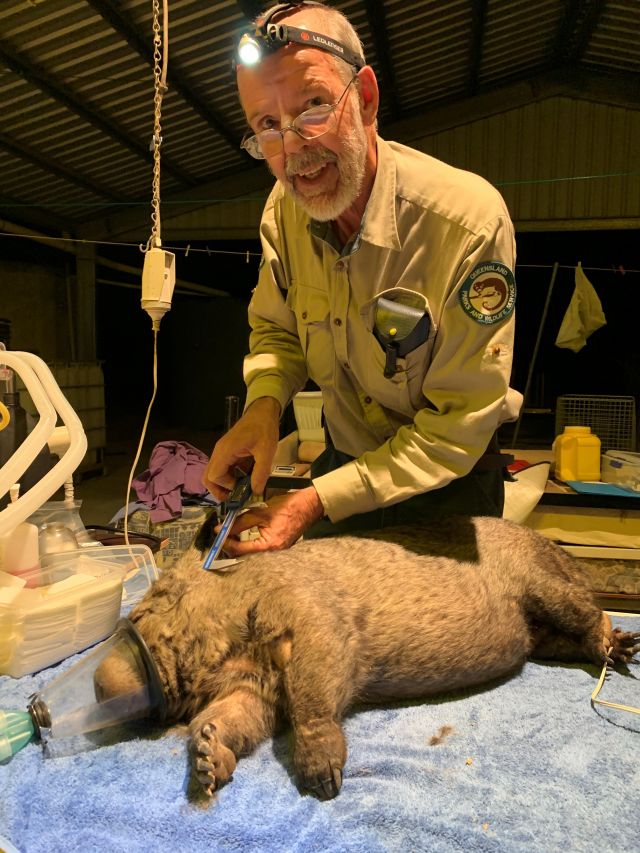 Alan Horsup measures a wombat as part of his research program. For more than 30 years, Dr Alan Horsup dedicated his life to some of Queensland’s most vulnerable threatened species, and he was critical in bringing them back from the brink of extinction.

He coordinated projects that included surveys for yellow-footed rock wallabies west of Charleville to the management of Proserpine rock wallabies on Hayman Island.

Between 2014 and 2017, Alan helped reintroduce Proserpine rock wallabies to the mainland by translocating more than 1200 animals from Hayman Island.

He was instrumental in the formation of the Scientific Advisory Committee, research projects with various universities and acquiring federal funding for threatened species programs.

But it was his work with the ongoing recovery of the northern hairy-nosed wombat that Dr Horsup will be most remembered for.

“When I began my career with QPWS, there were about 60 wombats left at Epping Forest National Park, which is extremely close to extinction,” Dr Horsup said.

“Over the past 30-years, I have visited Epping 350 times for various research projects and I have worked with a number of wonderful people who were all committed to the population of wombats.

“I’m pleased to say the population at Epping is now estimated at around 350 wombats, and we have established another population at Richard Underwood Nature Reserve.

“We have had some issues over the years, such as predation by dingoes but the predator proof fence and the introduction of water stations in the national park has seen the population steadily increase.

“I’m thrilled that we’re now at a point where the population is reaching capacity at Epping and we can identify other locations to begin the process of building new populations of wombats.”

Dr Horsup said although there was more work to be done to protect and conserve the northern hairy-nosed wombat, the population was in good hands.

“I work with many committed people in the Queensland Parks and Wildlife Service who will continue this vital work, and it is time for me to move on,” he said.

“I’m proud of the work I have done with threatened species in Queensland, and I’m also proud of the ongoing efforts by QPWS staff to protect our magnificent plants and animals.”

“Alan’s legacy will be a third population of northern hairy nosed wombats, and it is remarkable what he has been able to do for a species that was critically endangered,” Mr Buckley said.

“The Queensland Parks and Wildlife Service wish Alan all the best in his retirement, and his passion, dedication and knowledge will be missed.”

Photos and videos of the September research trip to Epping are available in the media centre.