Volunteers and QPWS carried the turtle to the Boonooroo shoreline. 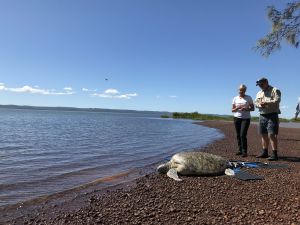 After a moment of hesitation, the recovered turtle made her way back out to the Great Sandy.

Queensland Parks and Wildlife Service (QPWS) rangers and volunteers from Turtles in Trouble Fraser Coast have released a green turtle back to its natural habitat on the Fraser Coast following its recovery from a speargun injury.

The adult female green sea turtle has spent the past two months at Australia Zoo Wildlife Hospital recovering from a deep wound to its neck, resulting from a speargun.

On 3 February 2022, volunteers from Turtles in Trouble Fraser Coast found the turtle stranded in mangroves at Boonooroo, south of Maryborough.

The volunteers, with support of QPWS rangers, arranged for the turtle to be assessed and treated by two local vets who provided urgent care.

Great Sandy Marine Park Ranger in Charge René Burgess said due to the extent of its injuries, the turtle was transported to Australia Zoo Wildlife Hospital for further treatment.

“While the initial plan was to remove the speargun head, further medical examination deemed this too risky,” Ranger Burgess said.

“Instead, the turtle was treated with IV antibiotics and is now clear of infection.

“Even though the spear tip is still in her body, it is not likely to cause her any future issues and she was cleared for release.”

Earlier this morning, Turtles in Trouble Fraser Coast volunteers transported the turtle from Australia Zoo Wildlife Hospital to Boonooroo, where rangers assisted with its release back into the water from the beach.

Turtles in Trouble Fraser Coast team leader Alison Hammond said this was the best outcome following such a reprehensible act.

“Sea turtles face many threats including destruction of habitat and pollution, they do not need to face the threat of spear fishers as well,” Ms Hammond said.

“It was heart-warming to see this turtle make a recovery and be released back to her home, but it is a shame she needed rescuing in the first place.”

Members of the public can report marine strandings by calling the Department of Environment and Science on 1300 130 372.