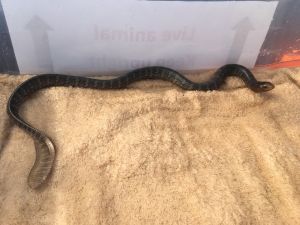 The female sea snake was unlawfully taken from the wild. 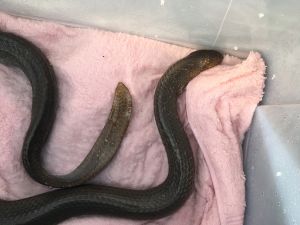 The juvenile sea snake was born in captivity.

Two olive sea snakes have been released into the ocean off Hervey Bay following a tip-off, a live birth, an investigation and a seizure.

In May, a member of the public contacted wildlife officers and alleged a sea snake had been captured illegally from the Great Sandy Marine Park and was being kept in a tank at a business in Hervey Bay.

Wildlife officer Chris Heckathorn said during the investigation, wildlife officers were surprised to discover the sea snake had given birth whilst in captivity, and both snakes were seized.

“The Department of Environment and Science would like to thank the person who provided the information about the snakes,” Mr Heckathorn said.

“Wildlife officers have zero-tolerance for people who break the rules and unlawfully take native animals from the wild, and many people in our community feel the same way.

“A lot of our compliance activity is based on tip-offs from members of the public, and we get a surprising number of reports about people unlawfully capturing native wildlife without a relevant permit.

“Most of these involve freshwater turtles or snakes, presumably because it is relatively easy to find turtles in public lakes, or pythons in scrub land or at residential houses.

“This incident was certainly unique as I have never dealt with the illegal possession of a sea snake in my eight years working with the department.

“The fact that the snake gave birth whilst in captivity added further intrigue to our investigation, and we were able to successfully release them at the location where the adult was caught.

“It is rare for wild-caught animals to be released again, as there is an increased risk that they will introduce disease into wild populations.

“Thankfully in this case, the time since capture and the method of keeping the snakes minimised these risks.”

Under the Nature Conservation Act 1992, capturing native animals from the wild without a relevant permit is prohibited.

Mr Heckathorn said it is also an offence to keep an animal that has been illegally caught, even if you were not the one who initially captured it.

“People can keep native animals, but they must obtain a relevant permit and must purchase the animal from a legal source such as another licence holder or a pet store,” he said.

“The maximum penalty for unlawfully keeping an olive sea snake is $13,785, and wildlife officers can issue a $689 on the spot fine.

“People should be aware that corals, marine plants, and all species of reptiles, birds and mammals are prohibited to be taken from Queensland’s Marine Parks.

“Anyone with information about the illegal trade of native plants or animals should call 1300 130 372, and all reports are investigated.”