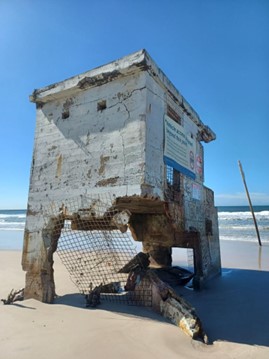 The Bribie Island Fortifications were constructed from 1939 to 1943 as part of the Southeast Queensland systems of defence during the Second World War.

In the interest of public safety, the Department of Environment and Science (DES) has made the difficult decision to collapse parts of the Northern and Southern searchlight fortifications remains within Bribie Island National Park, following the increased corrosion of the structures as a result of recent severe weather.

Queensland Parks and Wildlife Service Executive Director Neil Cambourn said the natural decay of the World War Two structures had led to a serious safety risk to members of the public, and that work was expected to commence later this week, weather depending, to bring the structures to a safe and stable state, which will then be left in-situ.

“The Department has been working to find a way to keep park visitors and staff safe while preserving as much of these historically-significant, structures as possible, which form part of the State heritage listed Second World War Fortifications on Bribie Island,” Mr Cambourn said.

“The Queensland Heritage Act 1992 allows for action to be taken in emergency situations which endanger peoples’ lives or health, as is the case here.

“These structures were built for a temporary purpose using concrete and steel reinforcing, which is expected to continue crumbling in Bribie Island’s highly erosive coastal environment.”

Mr Cambourn said the department had taken previous steps to protect the public around the searchlight forts including the installation of fences, security panels and signs.

“DES continue to maintain the remaining structures but there is no way to prevent natural coastal processes from taking place,” he said.

“The Department is committed to ensuring Bribie Island National Park’s dynamic landscape and unique coastal biodiversity is protected and remains in its natural state and there are no plans to interfere with the natural coastal processes that are impacting the searchlight forts.”

DES is considering long-term options to further manage all fortification structures on Bribie.

These other structures will not be impacted by the upcoming works to secure the searchlight sites.

To ensure the history of these fortifications is not lost, a project to digitally capture this heritage in a timeless interpretive memorial was conducted.