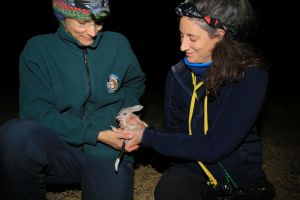 Queensland’s bilby population is improving in hops and bounds, thanks to the ongoing collaborative work between the Department of Environment and Science (DES) and Save the Bilby Fund (STBF).

This National Bilby Day, DES is acknowledging the combined efforts of STBF and the department to reduce introduced predators and protect bilby habitat both within and surrounding the 2500-hectare predator-exclusion enclosure in Currawinya National Park and at Astrebla Downs National Park, a stronghold for bilbies in Queensland.

“A population survey carried out within the enclosure at Currawinya National Park in April and May this year has showed more than 400 bilbies are living in the enclosure, eleven times the number of bilbies released into the enclosure since 2019,” Mr Head said.

“This is on top of the significant bilby population confirmed during last year’s survey at Astrebla Downs National Park in Central-West Queensland, which showed a considerable number was living in the area.”

Mr Head said because of the thriving bilby populations in Queensland, more than 30 of the marsupials were successfully relocated from Currawinya in Western Queensland to the Northern Territory in June this year, with the aim of improving populations diversity nationally.

“Thanks to the hard work of the department and Save the Bilby Fund through the reintroduction of 36 bilbies into the fence, ongoing maintenance of the fence, introduced predator monitoring within the fence and eradication of them around the outside of the enclosure at Currawinya, and the favourable seasonal conditions recently, there has been a bilby boom within the enclosure,” he said.

“This has allowed 34 animals to be safely translocated without impacting the remaining population.

“This was done in partnership between DES, STBF and the Australian Wildlife conservancy. After transporting them by plane, AWC successfully released the bilbies into a 450-hectare enclosure at their Newhaven Wildlife Sanctuary north-west of Alice Springs.”

Mr Head said more recent surveys have been carried out on private property, with more to come over the next few months in Astrebla Downs and Diamantina national parks and private land across western Queensland by DES, STBF and AWC to confirm current bilby populations in Queensland.

“These surveys are an example of the great collaborative work being done between the department, external organisations and researchers by working together to share information on their surveys.”

For the past 23 years, the environment department has been working in collaboration with STBF to recover bilby populations in Queensland.

Save the Bilby Fund CEO Kevin Bradley said it was heartening and very encouraging to see such great public and private conservation partnerships achieving better outcomes for bilbies in Queensland and across Australia.

“We also gratefully acknowledge the financial support of our bilby loving community, who continue to make it possible for us to participate in these successes,” Mr Bradley said.

“We look forward to continuing our partnership with DES in the interest of saving this iconic species from extinction and recovering its previous wide range.

“The bilby still only occupies a fraction of its former habitat so there is a considerable amount of work yet to be done.”

Mr Head said DES and STBF worked in partnership to build and maintain the predator exclusion fence at Currawinya as well as manage the bilbies living both in and outside the enclosure.

“Save the Bilby Fund work with DES conservation officers and rangers to manage threatening processes in and around the fenced area, including removing invasive pests and monitoring the bilbies,” he said.

“In 2011 and 2012, the fence was severely damaged by flood waters and required significant work to not only repair the fence, but make it more resilient to future floods.

“This work has been proven a success, with the upgraded fence standing strong against the significant floods that impacted parts of southwest Queensland in February and March this year.

“This is just one example of the exceptional work being carried out by these partnership groups and researchers to save our bilbies, and this National Bilby Day, I want to thank those who are continuing this important work to continue bringing bilbies back from the brink.”

Photos and videos from the most recent bilby population surveys can be found in the media centre.