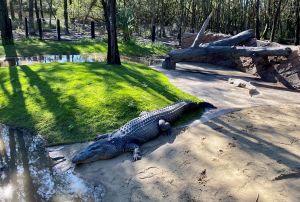 Mojo lived at Fleay's for more than 20 years and played a significant role in public education.

It is with great sadness that David Fleay Wildlife Park announces the passing of Mojo, an older male estuarine crocodile who was a monumental educational ambassador in Queensland.

Mojo, who was one of the biggest crocodiles in captivity in south-east Queensland at 4.4m long and weighing in at over 400kg has passed away.

He will be sadly missed by staff and visitors to Fleay’s. He was a particular favourite of school-age children.

Born in the 1980’s, Mojo became a resident at Fleay’s over 20 years ago and quickly transformed into one of the park’s great attractions.

He served as an important ambassadorial role for his species, the estuarine crocodile, and for other protected and threatened species in Queensland.

Mojo helped the Fleay’s team to educate thousands of people about the pressures crocodiles face in the wild, including poaching and habitat loss.

He also educated visitors about the importance of being Croc Wise in Croc Country in central and north Queensland.

For years, Mojo shared a pen with Madonna, a 3.4m female estuarine crocodile. Rangers are monitoring her closely for any signs that she is mourning her mate.