Rangers left a notice to comply at the camp. 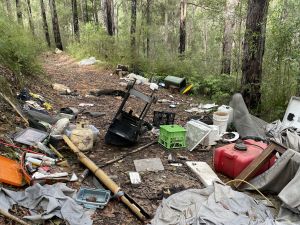 The man left a lot of rubbish behind for rangers to clean up.

When rangers recently asked an illegal camper to leave the Mapleton National Park, they didn’t expect him to abandon his belongings and trash what had been a neat yet illegal campsite.

“We love seeing people in our national parks relaxing and enjoying nature with their family or friends,” Ms Haslam said.

“What we don’t particularly enjoy is cleaning up the mess some campers leave behind, and thankfully it is quite rare to encounter an illegal camper.

“We received information from a member of the public about the illegal camp near the Browns Creek Fire Management Trail.

“We found the illegal camp and it appeared the man had been living there for some time. We left a notice to comply to advise the man that he was illegally camping.

“When we returned to the campsite, we found he had abandoned and trashed it. He also left his unregistered vehicle behind.”

Ms Haslam said illegal camps were a fire hazard, a pollution hazard and could negatively impact on the cultural and natural values of Queensland’s national parks.

‘Illegal camps and abandoned rubbish and equipment can also harm our unique and magnificent wildlife,” she said.

“He also abandoned his barbecue, couch, gas bottles, fuel tanks, clothes, linen, a mattress and a bow and arrow.

“Five rangers spent two days cleaning up the illegal camp, which included two trips to the tip and his abandoned car will have to be towed out of the park.

“It was one of our more unpleasant tasks, but we managed to keep a smile on our faces because we were making sure that area of the national park is clean again.

“The QPWS thanks the people who reported what they thought was an illegal camp in the national park, and I remind people they can be issued with a Penalty Infringement Notice if they set up illegal camps.

Anyone experiencing homelessness or at risk of homelessness is encouraged to call the Homeless Hotline on 1800 474 753. Information can be provided about where to find support, accommodation, meals or showers, and referral services may be offered.

View photos of the illegal camp in the media centre.