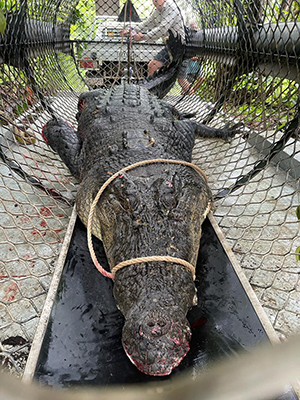 The iconic croc was removed from the Endeavour River using a baited trap. The male croc is missing his right foot and the end of its tail.

Wildlife Officers from the Department of Environment and Science (DES) have captured and removed a 4.3 metre estuarine crocodile from the Endeavour River at Cooktown.

On 30 January 2022, DES received a report that a large crocodile had been acting aggressively towards residents and had recently taken at least two dogs from the area.

Wildlife officers conducted a site assessment and the animal was then declared a problem crocodile due to its size, location and bold behaviour.

On Saturday 5 February 2022, the large male crocodile was captured in a baited trap. It was then transported to a DES holding facility in Cairns.

The crocodile had sustained multiple injuries and wildlife officers believe these were caused by territorial disputes with other male crocodiles. The animal is missing both its front right foot and the end of its tail.

The department will conduct a thorough assessment of the croc’s condition within the next week, and the animal may need veterinary treatment.

Due to its large size, (greater than 4m) the crocodile must be dealt with as an ‘iconic crocodile’ under Queensland’s conservation laws.

It also means that the animal may only be placed with a registered crocodile farm or zoo which agrees to use it for educational purposes about crocodile conservation and their ecology.