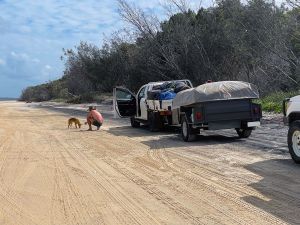 The man was seen by many people feeding the wongari.

Another person has been issued with a fine for feeding a wongari (dingo) on K’gari (Fraser Island) following a tip-off from a member of the public.

The 23-year-old Queensland man recently received a $2,300 Penalty Infringement Notice (PIN) after the incident was investigated by the Department of Environment and Science (DES).

Compliance Manager Mike Devery said the fine sends a strong message to residents and visitors to the island that feeding wongari will not be tolerated by the Queensland Parks and Wildlife Service (QPWS).

“A member of the public told rangers the man was at the front of the vehicle line while he was waiting for the ferry at Hook Point back in April,” Mr Devery said.

“The person said the man was ‘brazenly’ feeding the wongari, and given his place at the front of the cue, his offending was witnessed by multiple people.

“Thankfully, the member of the public was able to take photos of the man as he fed the wongari, and they provided them to rangers.

“Following a review of the witness statements and photographs, QPWS compliance officers interviewed the man and he admitted feeding the dingo.

“The man told compliance officers that he threw biscuits in the sand to the wongari when he was cleaning out his vehicle.

“This is the second fine this year that has been issued to a man for feeding a wongari while waiting for the barge at Hook Point, and rangers are urging people not to do it.

“Feeding wongari can cause them to become habituated and approach people for food, which can put people and the wongari at risk.”

Mr Devery said the rules were designed to keep people and wongari safe and those who ignored the rules could expect a fine or a court appearance.

“It is an offence under the Nature Conservation (Animals) Regulation 2020 to feed a native animal in the wild that is dangerous, venomous or capable of injuring a person,” he said.

“In 2022, rangers have issued 22 PINs for food availability and two PINs for deliberate feeding, and on many occasions members of the public have provided us with information and photos.

“We have found most of the PINs have been issued to men, and rangers are asking residents or visitors to the island to remind their male friends or family members not to break the rules.

“Around 400,000 people visit the island each year, and a small percentage of those visitors are disregarding the safety of the wongari and other residents or visitors.

“Rangers are asking residents and visitors to report all incidents of food availability and deliberate feeding as soon as possible.

“I remind people that the maximum penalty that a court can impose for deliberately feeding wongari is $11,500.”

People are encouraged to be dingo-safe and report any concerning dingo encounters by calling 07 4127 9150 or emailing dingo.ranger@des.qld.gov.au