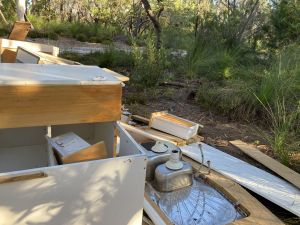 The kitchen was dumped in April and discovered by rangers. 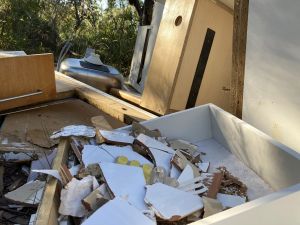 A thorough investigation has led to two fines being issued over the dumped kitchen.

The person who allegedly dumped an old kitchen in the Cooloola section of the Great Sandy National Park has been fined more than $3,600 following a thorough investigation.

The Department of Environment and Science (DES) issued the fines on 20 July 2022.

On 12 April, a Ranger with the Queensland Parks and Wildlife Service (QPWS) discovered the illegally dumped kitchen near a fire trail in the national park.

The waste included a kitchen sink along with drawers, cupboards and benchtops.

Under the Waste Reduction and Recycling Act 2011, it is illegal to dump waste in Queensland.

DES’s Litter and Illegal Dumping Team worked with Rangers to investigate the waste, and discovered the kitchen had been removed from a premises in Rainbow Beach.

The investigation successfully identified the person allegedly responsible, and they were issued with a Compliance Notice, which they failed to respond to.

They were fined $2,205 for illegal dumping, and $1,437 for failing to comply with a Compliance Notice.

It is environmentally irresponsible, creates a fire and pollution hazard and can put people and native animals at risk of injury.

Where offenders are identified they will be issued with fines and can be required to clean up the waste. For serious breaches of the Waste Reduction and Recycling Act 2011, offenders can be prosecuted in court.

People with information about illegal dumping are urged to contact the Pollution Hotline on 1300 130 372.