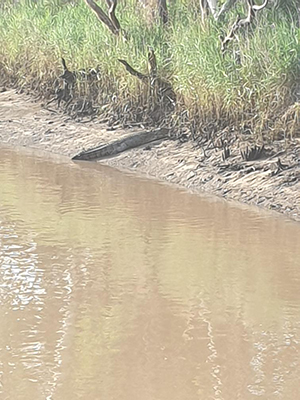 Crocodile on the banks of the Fitzroy river.

Members of the public are reminded that deliberately feeding crocodiles can put lives at risk, with seven people fined for this foolish behaviour in a single incident last year.

On 15 April 2021, wildlife officers from the Department of Environment and Science were installing new crocodile warning signs at the Proserpine River when they were approached by members of the public.

Manager Wildlife and Threatened Species Operations Michael Joyce said the wildlife officers were told that people were feeding crocodiles from the banks of the Proserpine River.

“The wildlife officers observed the group for a short period of time and noticed a large crocodile near the bank pulling on a rope,” Mr Joyce said.

“After observing chicken meat attached to the end of the ropes and boxes of raw chicken meat beside the group and in a parked car, wildlife officers directed the ropes to be removed from the river.

“The ropes and boxes of chicken were then seized as evidence, all members of the group were interviewed and directed to leave the area.

“On April 28, a group of seven people were issued $400 Penalty Infringement Notices (PINs) for deliberately feeding a crocodile in the wild.

“One of the group members initially elected to contest their fine in court and the matter was resolved in December last year when the fine was paid.”

Mr Joyce said it is an offence under the Nature Conservation (Animals) Regulation 2020 to feed a native animal in the wild if the animal is dangerous or venomous, or capable of injuring a person.

“Estuarine crocodiles, regardless of their size, clearly fall into that category,” he said.

“The deliberate feeding of crocodiles is extremely dangerous, as it can lead to the animals learning to associate people with food.

“These crocodiles may then start to approach other people for food or hang around areas such as boat ramps waiting for their next easy meal.

“The deliberate feeding of crocodiles can place future visitors to the riverbank at that location at an increased risk of a crocodile attack.

“The maximum penalty for deliberately feeding crocodiles is $5,222, and anyone with information about the deliberate feeding of crocodiles is encouraged to report it to the Department by calling 1300 130 372.”