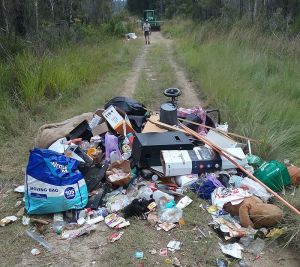 It is illegal to dump rubbish in our state forests and national parks. A fine was issued following an investigation to the person who allegedly dumped the rubbish.

A person who allegedly dumped a large amount of household waste in the Tewantin National Park has been issued with a $2,205 fine by the Queensland Department of Environment and Science.

A local resident discovered the waste in April and uploaded photos to social media. Queensland Parks and Wildlife Service (QPWS) Rangers inspected the waste on 22 April, which included whitegoods, furniture and general rubbish.

QPWS Rangers worked together with the department’s Illegal Dumping Compliance Team to investigate the matter. The investigation concluded that up to 2,500 litres of waste had been dumped at the site.

The investigation successfully identified the alleged offender, and on 18 May 2022 a Penalty Infringement Notice (PIN) was issued to a Sunshine Coast resident under Section 104 of the Waste Reduction and Recycling Act 2011.

The department takes a zero-tolerance approach to illegal dumping in national parks and state forests. Where offenders are identified they will be issued with fines and required to clean up the waste. Where offending is particularly serious, offenders will be prosecuted in court.

Anyone with information about illegally dumped waste in our national parks and state forests should contact the department’s Pollution Hotline by calling 1300 130 372.

Photos of the rubbish site are available in our media centre.