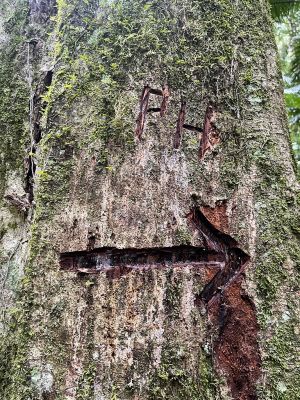 Rangers found a number of carvings into a 500-year old tree. 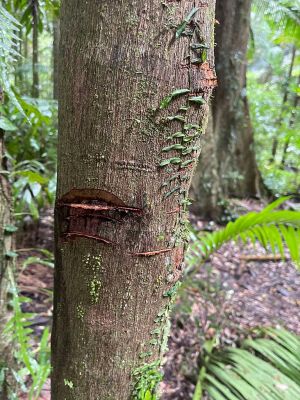 Machete marks in trees can be there forever.

A man who admitted to thirteen incidents of environmental vandalism at Westray’s Grave site in Lamington National Park has been fined $551 by the Queensland Parks and Wildlife Service (QPWS).

Compliance Manage Mike Devery said rangers investigated the environmental vandalism after a member of the public reported it to the Department of Environment and Science (DES).

“Westray’s Grave site is part of the Stinson plane crash memorial site which this year celebrated the 85th anniversary of the rescue of the survivors,” Mr Devery said.

“The environmental vandalism occurred in May and thankfully we were able to quickly identify the person involved.

“The man admitted to carving a phrase and a series of numbers into a large, buttressed tree which is estimated to be about 500-years old.

“Rangers also found a juvenile piccabeen palm tree and a juvenile walking stick palm had been chopped down, and a number of trees had sustained damage from a knife or machete.

“The Stinson plane crash memorial site is a spiritual place and deliberately damaging trees next to the grave site is like graffitiing a church.

“The man apologised for his actions and understands that rangers now have to try and mitigate the visual impact of the environmental vandalism.”

Mr Devery said depending on the severity, people accused of environmental vandalism can be issued with a notice to appear in court.

“Environmental vandalism in any of Queensland’s national parks is extremely disappointing, and anyone with information is urged to called QPWS on 1300 130 372,” he said.

“Rangers don’t tolerate this type of behaviour, and nor does the community so if you put your mark on a tree, it won’t be for free.

“When trees suffer vegetation damage like this, they can take years to recover, and rangers will apply natural raw yogurt to encourage lichen and moss to cover up the vandalism quickly.

“When people cut into tree bark, they break the protective layer which can often result in disease or pests gaining access to the tree, and it can also lead to the tree dying.

“People need to understand that many trees in our national parks are hundreds of years old, and these carvings leave permanent marks.

“Rangers cannot remove the scars, which have a negative impact on the landscape and is something other visitors to the national park do not want to see.

“Environmental vandalism of this type is not only disgraceful, but it can inspire others who don’t care about the national park to carve something into nearby trees.

“If you visit a national park, don’t leave a mark, because rangers investigate every incidence of environmental vandalism and you will be fined.”