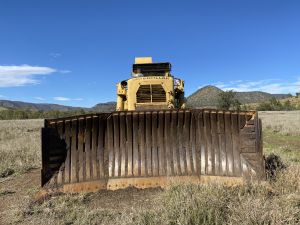 The man used a bulldozer to push over trees and clear a track. 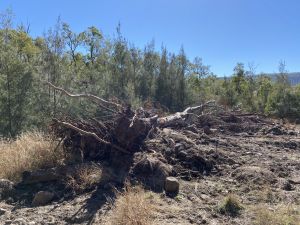 It is unlawful to clear vegetation in a national park.

A 63-year-old man has been fined $6,000 in the Emerald Magistrates Court after pleading guilty to clearing more than two hectares of the Carnarvon National Park for mustering purposes.

The man was also ordered to pay $250 in legal costs. No conviction was recorded.

The court heard the man also used a bulldozer to clear trees, soil, grass and rocks to create a track just over a kilometre long into the national park from his neighbouring property.

In early 2021, departmental officers were flying over the national park and identified an area where there was suspected unauthorised clearing.

During the subsequent investigation, departmental officers executed a search warrant at the property, located the bulldozer involved in the clearing works and gathered evidence.

The investigation found the man had cleared the area in the national park, which included clearing native eucalypt trees and cycads, and unlawfully mustered 35-38 head of cattle.

In sentencing the man, the court considered the offending was serious, and the Carnarvon National Park is a pristine region of great importance to the community and home to a number of protected plants.

The court accepted that the man was remorseful and did not intend to clear in the national park, and that he wanted to do the ‘right thing’ in the future. It also took into account that the man fully cooperated with the investigation and pleaded guilty at the earliest opportunity.

Had these factors not been present, a considerably higher fine could have been expected.

The Department of Environment and Science (DES) welcomes the fine and hopes it sends a message to Queensland’s grazing community, particularly those that neighbour national parks and State forests, that activities in the national park must not be unlawful.

Graziers are reminded to check property boundaries prior to conducting clearing on their property and apply for the appropriate mustering permits to facilitate the removal of stock from national parks in an expedient manner.

As the environmental regulator, DES will take strong enforcement action, including by prosecuting people who clear any natural or cultural resources or unlawfully muster cattle in national parks.

View photos and videos from the media centre.