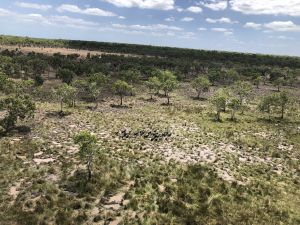 Feral pigs in Luma Luma swamp, which is a cultural site. 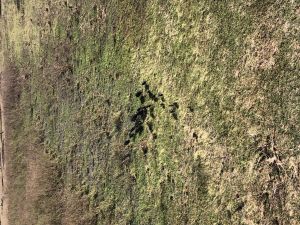 Skilled and experienced marksmen in helicopters have removed a significant number of feral pigs from national parks in the Cape York region.

“QPWS is a large land manager in collaboration with Aboriginal Joint Management partners across Cape York, and like all land managers, we are responsible for managing feral animals on these lands,” Mr Mead said.

“The feral animal program targeted feral pigs, and between 1 and 4 December 2022, we removed 2041 pigs from the environment in our Cape York national parks.

“Removing that number of feral pigs is a fantastic outcome, as they are highly destructive and cause extensive damage especially to our immensely valuable wetland areas that form the lifeblood of the Cape York landscape.

“Poor water quality is a major threat to the health of the Reef, and many of the wetlands targeted act like nature’s kidneys by improving the water quality for the inshore areas of the far northern section of the Great Barrier Reef.

“Removing feral animals from these wetlands is critical and contributes enormously to the quality of land-based water run-off by providing well-functioning landscape scale filters that capture, and trap sediment and nutrients, which would otherwise end up on the Reef.

“Feral pigs trample and uproot vegetation while they forage for food, and once-clear waters with native lilies are turned into muddy bogs no longer suitable for many native species.

“Though they mainly eat plant material, they are highly adapted to our environment, and they will eat anything they can find or catch, including birds, insects, frogs, small mammals and reptiles.

“Their diet also includes marine turtle eggs and hatchlings as they emerge from the nest, and I’m pleased to add that we removed 155 feral pigs in eastern Cape York turtle nesting habitat in November, just before turtle nesting season commenced.”

Mr Mead said the Department of Environment and Science places a high priority on managing feral pests, and conducted an integrated approach to feral pig management.

“Across Queensland, feral pig populations are monitored to measure the effectiveness of our control programs, and we also monitor and control populations of feral horses and feral cattle,” he said.

“Control activities are prioritised to focus on feral pig populations that are having the greatest impact on key areas and values within our national parks.

“Across Queensland, our control programs are ongoing, and these are meticulously planned to ensure we can remove as many feral animals as possible while the choppers are in the air or the traps are on the ground.

“Regarding feral pigs, we also use baits, fencing and ground control, and we are trialling the use of new and innovative techniques such as the boar-buster traps in far north Queensland national parks.

“Removing thousands of feral pigs from these very special and unique landscapes will have immediate benefits, including less trampling, improved water quality, regeneration of native vegetation and more habitat and food for native animals.

“Given the vast size and remoteness of Cape York national parks, populations of feral pigs are most effectively controlled through aerial shooting.

“Our aerial shooting programs are conducted by skilled and experienced QPWS staff from helicopters with the support and participation of Traditional Owners and landholders through our Joint Management agreements.

“As with all control programs, human safety is the highest priority, and aerial control operations are conducted humanely and in accordance with approved pest plans.

View photos and videos in the media centre.