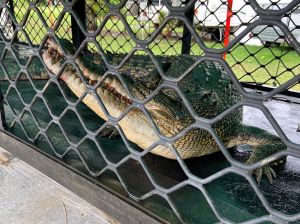 The 2m crocodile was removed from the wild after exhibiting bold behaviour.

A two-metre crocodile that was hanging around a caravan park and boat ramp at Kurrimine Beach in far north Queensland has been removed from the wild.

The crocodile was captured in a baited trap on 21 April 2022 and will be rehomed to a farm or zoo.

A member of the public reported the crocodile to DES recently via the QWildlife app. Wildlife officers later confirmed the presence of the animal in an estuary at Kurrimine Beach, south of Innisfail.

The animal was unusually bold for its size, and given its location, it was declared a dangerous crocodile and targeted for removal from the wild.

When the trap was set, the animal was quickly captured overnight.

People are responsible for their own safety in croc country, but under the Queensland Crocodile Management Plan, Kurrimine Beach is within Zone D (Targeted Beach Management Zone).

This means any crocodile two metres or greater in length, or any crocodile displaying dangerous behaviour, is targeted for removal.

People in croc country are reminded to always be Crocwise at all times. In particular:

Photos of the crocodile are available in the media centre.