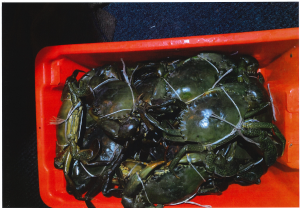 Rangers and Fisheries Officers located 24 live mud crabs on a boat that was caught fishing in a Green Zone. Two men were caught on surveillance inspecting crab pots that had been unlawfully set in the Green Zone.

Two fishers have received a total of $20,131 in fines and costs for illegally crabbing in a Moreton Bay Marine Park ‘green zone’ as a result of a joint operation between Queensland Parks and Wildlife Service (QPWS) and Queensland Boating and Fisheries Patrol (QBFP).

Later that night, rangers observed two men in a recreational vessel approach the same area and inspect the crab pots.

The rangers and Queensland Boating and Fisheries Patrol (QBFP) officers intercepted the vessel at a nearby boat ramp and conducted a search, locating 24 live mud crabs on board, which were seized.

Officers also seized a GPS unit which confirmed the vessel had travelled through the green zone at the time of the rangers’ patrol.

All Marine National Park zones, known as green zones, are designated “no take” areas, with a complete prohibition on any crabbing or fishing.

As a result of the investigation, a 36-year-old man and a 46-year-old man were charged with one count each of using a marine park for a prohibited purpose.

While the men were recreationally fishing on the night of the investigation, both men were active, licenced commercial fishers at the time of the offence.

In sentencing, the Court highlighted the important role commercial fishers have in sustaining the environment to protect for future generations.

Southern Marine Parks Principal Ranger Steve Hoseck said the outcome of the joint investigation was a strong reminder that fishers should expect to see rangers and QBFP officers in marine parks anywhere at any time.

“Green zones are in place for a reason; to protect our precious marine ecosystems from the threat of over-fishing,” Ranger Hoseck said.

“Rangers will continue to conduct overt and covert patrols of these areas and work closely with other government agencies including QBFP to reduce threats and impacts to our marine parks.

“As the Court’s decision reflects, there is responsibility on us all to protect the environment for future generations and there is no excuse to fish within designated green zones.”