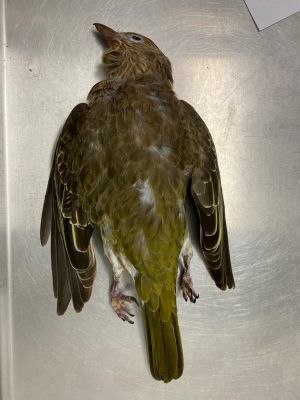 It is bowerbird breeding season so we're asking people to stop using snail bait for a few months.

Residents in the Mount Tamborine region are asked to stop using blue snail pellets after the deaths of a number of male and female regent bowerbirds.

Manager Wildlife and Threatened Species Operations Frank Mills said a member of the public alerted wildlife officers to the deaths.

“The Queensland Parks and Wildlife Service would like to thank the member of the public for reporting the deaths of the bowerbirds,” Mr Mills said.

“At this stage, the suspected cause of death is blue snail pellets, and several carcasses have been provided to Currumbin Wildlife Hospital to determine the cause of death.

“The discovery of these bird deaths has been distressing for people in the Mount Tamborine region and we’re currently investigating if the suspected poisoning is intentional or not.

“Anyone with information is urged to contact wildlife officers by calling 1300 130 372 (option 1) and we ask people to stop using the snail bait immediately.

“The bowerbird breeding season runs from August to January, and to attract a mate, the male bowerbirds will build a structure called a bower from grass and sticks.

“He will decorate the structure with colourful items, and male bowerbirds are renowned for being attracted to blue items such as clothes pegs, plastic items and other colourful items.

“Unfortunately, we believe the males are decorating their bowers with the blue snail pellets, which contain toxic substances which could be causing the bird deaths.

“As the males regularly steal from other male’s bowers, there is the possibility that we might see the deaths of more birds.”

Mr Mills said the bowerbird deaths were currently limited to the Mount Tamborine region, but wildlife officers wanted to hear from members of the public to determine the range of the deaths.

“We are surrounded by wildlife which is wonderful, but we have to realise the impact we can have on them is often detrimental,” he said.

“If people notice a large number of deceased bowerbirds, or any bird species, they should report it to the department by calling 1300 130 372.

“Unfortunately, birds can also die from natural causes, such as exhaustion after being caught in storms or algal blooms in waterways.

“Wildlife officers investigate every report we receive, and we routinely work with the RSPCA and the SEQ Wildlife Hospital Network during our investigations.”