Beach driving – there’s no fun in a fatality This car not only rolled, it was then swamped by the ocean. 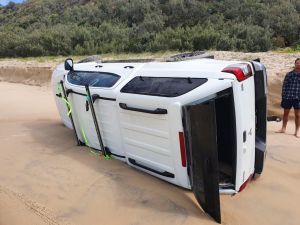 This car rolled off the dunes and straight into the ocean.

Rangers patrolling beaches in the Great Sandy Strait are warning drivers there will be a serious injury or fatality after eleven beach rollovers during the Easter long weekend.

Ranger Erin Atkinson said people driving on the beach must drive to conditions as the shifting sands and tides can be unforgiving.

“This number of beach rollovers during a long weekend is unacceptable and that is eleven or more possible fatalities that were somehow avoided.

“Thankfully everyone involved in these rollovers escaped serious injury, but many of the vehicles have been completely ruined by rolling over or being swamped by the tide.

“The people involved in those rollovers are extremely lucky to be alive and uninjured, and they’ve walked away with memories they’ll keep but not the ones they wanted.

“People were driving at the top of the tide, on the edge of the dunes and the bank simply gave way,” Mr Daniels said.

“One guy wasn’t even in his car. He parked on the dune and a big wave washed into the dune and his car toppled.

“When they topple, they fill up with saltwater and sand and their cars are a total write-off. People are in a hurry, they’re risking their expensive cars and some of them weren’t insured.

“I want people to be safe on the Cooloola Coast. Everyone knows not to drive two hours either side of hightide, but they do it anyway.”

Ms Atkinson said driving on vegetated sand dunes is unlawful and can damage vegetation and habitat for nesting turtles and shorebirds.

“At the weekend, a driver not only rolled his vehicle over, he also received a $275 fine for driving on vegetated sand dunes and had to pay a towing fee,” she said.

“Normal road rules apply to the beach, so people must slow down, drive to the conditions and wear a seatbelt.

“We also work with the Queensland Police Service in the ongoing Operation Sand Strike which is designed to keep drivers and people on our beaches safe.

“There’s fun to be had at the beach but there’s no fun in a fatality, and hopefully those eleven drivers, their friends and those in the area learned valuable lessons at the weekend.”