Batavia coins to be returned to rightful home 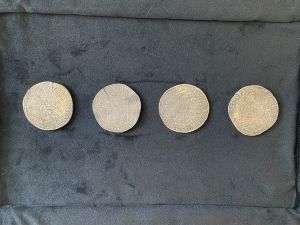 The coins were taken from the Batavia in 1992. The detail on the coins is amazing.

Four stolen coins that made their way to Queensland from a notorious shipwreck off Australia’s west coast will be returned to the Western Australian Museum.

Principal Heritage Officer Celeste Jordan said the coins, which dated back to 1500s and 1600s, were taken without a permit from the Batavia wreck site at Morning Reef on the Houtman Abrolhos chain of islands.

“The Batavia was on her maiden voyage when it sank in the early hours of 4 June 1629 with more than 300 people on board,” Ms Jordan said.

“She was the flagship for the Dutch East India Company (VOC) and one of four ships owned by that company – including Zeewick, Vergulde Draeck, and Zuytdorp – that sank off the coast of Western Australia.

“Batavia was on a spice mission but was also carrying a cargo of silver coins and antiquities belonging to the artist Rubens which were for sale to an Indian Mogul ruler.

“Prefabricated sandstone blocks were also on board, and they were for a portico to be built as a gatehouse in the city of Batavia (modern day Jakarta) where VOC set up new headquarters.

“The shipwreck survivors went to nearby islands and others remained on board, and the story of the Batavia took a tragic turn.

“The Captain Francisco Pelsaert took a small boat and several crew members to get help in modern day Jakarta, and in his absence, his enigmatic deputy, under-merchant Jeronimus Cornelisz, staged a mutiny.

“By the time Captain Pelsaert returned to rescue the survivors, Cornelisz and his associates had murdered 115 people and sent others to their deaths through drowning.”

“Captain Pelsaert quickly rounded up the mutineers, and ordered the execution of Cornelisz.”

Ms Jordan said of the remaining cargo, as much as possible was retrieved from the ocean floor and the Batavia wreck.

“They were unable to retrieve everything, and that brings us to 1992 when four coins were taken by a person without a permit from the shipwreck,” she said.

“The person was diving at the wreck when they found and removed the coins. Removing artefacts or parts of a protected shipwreck is unlawful under Australia’s Underwater Cultural Heritage Act 2018.

“The person, now living in Queensland was unaware they had breached Australian law and recently sought a permit to keep the coins.

“Following a discussion with Commonwealth officers, the person was cooperative and agreed to surrender the coins.

“Officers From the Department of Environment and Science were asked by the Commonwealth Government to take possession of the coins.

“They will be sent to the Western Australian Shipwrecks Museum, which holds and displays a significant collection of Batavia artefacts.

“There are penalties for breaching Australia’s underwater cultural heritage legislation, ranging from fines to imprisonment for unlawfully removing or possession artefacts from wreck sites without a permit.”

View vision of the shipwreck.