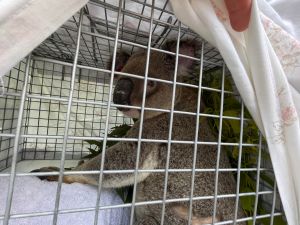 A rather portly koala nicknamed “Sweetheart” has been returned to the wild with clear eyes after being treated for conjunctivitis by the RSPCA and the Department of Environment and Science.

RSPCA veterinarian Dr Tim Portas said a member of the public noticed the koala in a tree on The Hollow Road at Josephville in October.

“Thankfully the member of the public knew the koala was virtually blind through illness and wrapped him up and contacted the RSPCA,” Dr Portas said.

“The koala was taken to the RSPCA Queensland Wildlife Hospital at Wacol where he was diagnosed with severe conjunctivitis in both eyes.

“He was in danger of being hit by a car, getting attacked by a dog or starving to death.

“Sweetheart also had superficial lesions on his body, a wound to his muzzle and he’d lost hair in patches on his right forearm.

“He was treated by the RSPCA for five days and when he was eating and had settled down, we transferred him to DES’s Moggill Koala Rehabilitation Centre for further treatment.”

DES veterinarian Dr Stephanie Shaw said when the koala arrived at Moggill his conjunctivitis had improved.

“He still had obvious keratitis, or inflammation of both corneas, and although he was eating we weren’t sure if he was suitable to be released back into the wild because we were worried about corneal scarring,” Dr Shaw said.

“The Chlamydia treatment included injections of chloramphenicol antibiotics, eye medications for severe conjunctivitis and minor surgery on both eyes to reduce the proliferative conjunctiva. “We had to wait several days to determine the degree of corneal scarring and vision impairment he may suffered.

“But after recovering from the minor surgery, we found he had little corneal scarring and no vision impairment, so we monitored him to make sure he was eating and gaining weight.

“He’s about eight years old, and weighed in at 9.6kg, which is about as big as they get in Queensland.

“Last week, after being at our Moggill facility for 21 days, we released him back into bushland near where he was found.

“The department would like to thank the RSPCA and the volunteer carers and care groups who work tirelessly to make sure our sick or injured animals are rehabilitated and released.”

Photos and footage are available from the Media centre.