Stay off the dunes at Byfield National Park 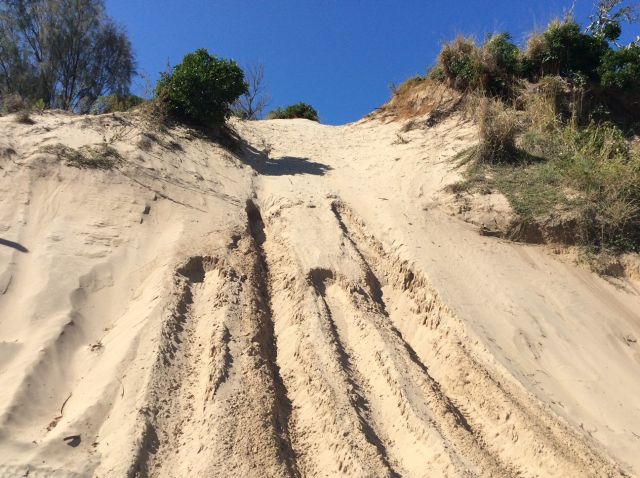 Drivers attempt to scale steep dunes at Byfield, and cause damage. Some dunes are too steep for vehicles.

The Department of Environment and Science (DES) is asking visitors at Byfield National Park to respect important cultural and ecological sites after recent damage caused by four-wheel drivers.

Acting Senior Ranger Kim Fleischfresser said rangers inspected a midden at Corio Bay and discovered damage caused by a four-wheel-drive in attempting to scale the dunes.

“There is a culturally significant midden at Corio Bay where the Darumbal First Nations peoples used to gather together and eat shellfish,” Ranger Fleischfresser said.

“Four-wheel-drivers illegally accessing the sand dunes have inadvertently caused damage to the site.

“The protection of cultural and spiritual landscapes in Queensland is vital for our First Nations peoples, and the Queensland Parks and Wildlife Service helps to care for culture in Byfield National Park.

“The vehicle also caused serious damage to dune vegetation, which can create or exacerbate erosion issues by damaging sensitive vegetation that stabilises the dunes.

“Four-wheel-drives can also impact on marine turtle and shorebirds when they’re nesting in the foredunes, destroying their eggs.

“People taking their four-wheel-drives off the approved tracks also pose a safety risk to other park users and themselves, as unapproved tracks can pose serious safety risks, and damage the values of the park.

“Rangers conduct regular patrols of the area to educate the public and, if necessary, issue penalty infringement notices.”

“There are a plenty of activities people can do in the park, including camping, fishing and walking,” she said.

“People can also use four-wheel-drives in the park, but their vehicles must be registered and drivers must be licensed.

“For safety and conservation reasons, vehicles are only permitted on marked tracks and we ask that visitors obey the signs and not take their vehicles off authorised, marked tracks.”

Please see this Dropbox for photos and video.