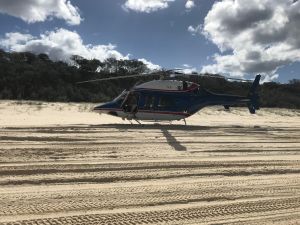 A man has been issued with a penalty infringement notice by the Queensland Parks and Wildlife Service (QPWS) for landing a helicopter on K’gari (Fraser Island) without authorisation.

On Tuesday April 13, 2021, a ranger saw the helicopter heading south at low altitude and landing near Eli Creek on the edge of an area of beach used as an airstrip by an authorised commercial aircraft operator.

The ranger did not observe any emergency services or media signage on the helicopter, and when the rotors stopped, approached the occupants and asked if there was an emergency.

The pilot advised he had landed to collect visitors to the island, and would move on once they were on board.

A staff member from the authorised commercial aircraft operator Air Fraser approached the pilot and advised him that an aeroplane was about to land.

Private pilots are reminded that under the Nature Conservation (Protected Areas Management) Regulation 2006, it is an offence to land an aircraft, including an aeroplane, helicopter or light aircraft on K’gari or other QPWS managed areas without permission.

The man was issued with a $500 Penalty Infringement Notice (PIN).

purposes, including scenic and recreational overflights, access, filming for documentaries and other purposes.

The unauthorised landing of aircraft and recreational craft in QPWS managed areas can cause a number of issues, including:

Emergency landings do not require authorisation in QPWS managed areas.