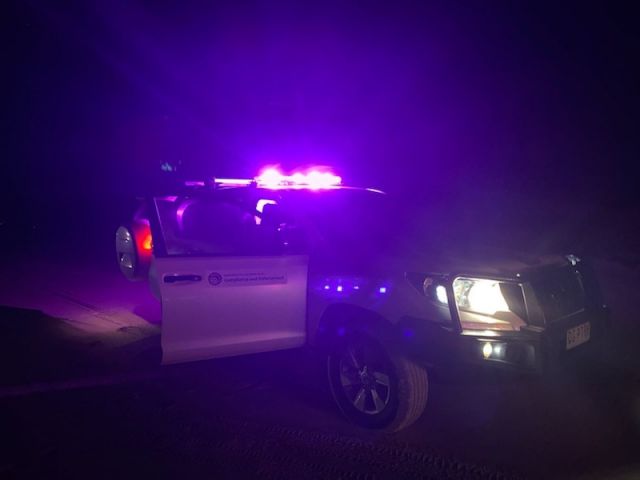 Twenty penalty infringement notices (PINs) were handed out to campers at Teewah during a weekend compliance blitz by the Queensland Parks and Wildlife Service (QPWS).

Compliance Manager Mike Devery said QPWS officers were confronted by unlawful campfires, people not wearing seatbelts when driving on the beach and others camping without permits.

“It was disappointing to see prohibited campfires at three camping areas over the weekend, which is thoughtless behaviour,” Mr Devery said.

“Last week, a prohibited campfire at Teewah almost escaped into the dunes and it had to be extinguished by other campers, QPWS rangers and the Teewah Rural Fire Service.

“Despite campfires being banned at Teewah for almost a year, every weekend rangers are handing out penalty infringement notices (PINs) to people who light campfires.

“I believe people know the rules and are choosing to ignore them, because the campers had attempted to conceal the fires by strategic placement of vehicles and tents, or by placing the fires at the back of the dunes.

“Obviously it is difficult to conceal a campfire at night. They’re banned for safety and environmental reasons and anyone who lights a prohibited campfire is risking a fine.

“We observed a campfire at another camping area and upon our arrival, several people fled into the bush, but were identified during another visit the following morning.

“These campers had set up in a ‘no camping’ area, they had lit a prohibited campfire, none of them had a camping permit and they were too intoxicated for us to move them on.

“The group were issued PINs for failing to obtain a camping permit, and we directed them to leave once it was safe to do so in the morning.”

PINs issued at the weekend include:

Mr Devery said it was extremely concerning to see unrestrained children in vehicles in the 80km zone on chopped up sections of the beach.

“That is a fatality waiting to happen, as the chopped up sections of the beach can cause vehicles to slide around regardless of driver behaviour,” he said.

“I did notice considerably less evidence of ‘circle work’ and ‘fishtails’ in the sand along various parts of the beach that are obvious hoon signatures.

“I hope it is an indication that people are changing their beach driving behaviour due to regular compliance and educational patrols by QPWS and the Queensland Police Service.

“A motorcyclist received a PIN for allegedly riding without a Vehicle Access Permit (VAP), and his rear number plate was bent upwards so it was horizontal and unable to be read.

“The rider was also given a direction to leave the area as he indicated that he did not intend to comply with the rules.

“People who visit Teewah are reminded that rangers and police routinely conduct compliance patrols, and people must follow the rules or risk injury or receiving a PIN.

“Get your camping permits, your vehicle access permits and don’t light campfires. Respect Teewah, respect nearby campers and respect the rules.”

Photos and video are available here: