Campfires are prohibited at Teewah 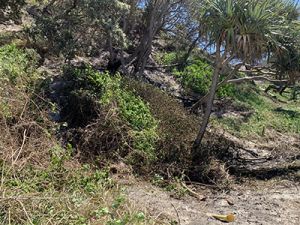 The Department of Environment and Science is urging visitors to Teewah to stop lighting campfires after a fire reignited yesterday and almost spread into the dunes.

Senior Ranger Col Lawton said the people who lit the prohibited campfire had left the camping area and obviously didn’t put it out correctly.

“Thankfully nearby campers formed a bucket brigade and doused the fire until Queensland Parks and Wildlife Service rangers arrived, along with the Teewah Rurals,” Mr Lawton said.

“This was a very narrow escape, as the fire had progressed to the dunes and was being driven by the extremely strong westerly winds we had yesterday.

“Rangers, the Teewah Rurals and nearby campers worked hard to extinguish the fire, which had burnt out an area about 40x40 square metres.

“Had the fire burned for another ten minutes it would almost certainly have escaped up the steep dunes and into thousands of hectares of inaccessible country.

“The last bushfire in September 2019 was the result of an escaped campfire and burned around 15,000 hectares of the national park.

“The Queensland Parks and Wildlife Service would like to thank the campers and Teewah Rurals for their quick and decisive action.”

Mr Lawton said open campfires had been prohibited at Teewah almost a year for safety reasons, and the latest fire was being investigated.

“Unfortunately, irresponsible campers are ignoring the rules and the Queensland Parks and Wildlife Service is asking for public assistance to identify the person or people responsible for the fire,” he said.

“Every weekend, rangers are handing out fines to people who don’t care about their fellow campers or the national park and light prohibited campfires.

“This foolish behaviour has to stop, and we’re asking everyone who visits Teewah to respect the rules, respect country and change your behaviours.”