It’s not just Queensland kids getting ready for Halloween – some of our spookiest animals are also preparing for the most frightful night of the year. If you’re looking for a place to trick or treat this year, perhaps avoid the Mount Etna caves, as they are haunted by ghost bats. These caves are possibly their best-known Queensland roost site.

On Halloween night, you’ll find them out hunting as they don’t like to move about much in daylight.

They also like to keep to themselves and unless you’re keen on gorging yourself on insects, lizards or small birds instead of lollies, you might want to steer clear.

The ghost bat was also responsible for one of Australia’s longest-ever environmental campaigns – to stop limestone mining at Mount Etna north of Rockhampton.

Mining ceased in March 2004 and in 2008 the Mount Etna mining site was handed over to the Queensland Government to become the Mount Etna Caves National Park.

The ghost bats – now listed as Endangered under Queensland’s Nature Conservation Act – survived, although their numbers are in decline. 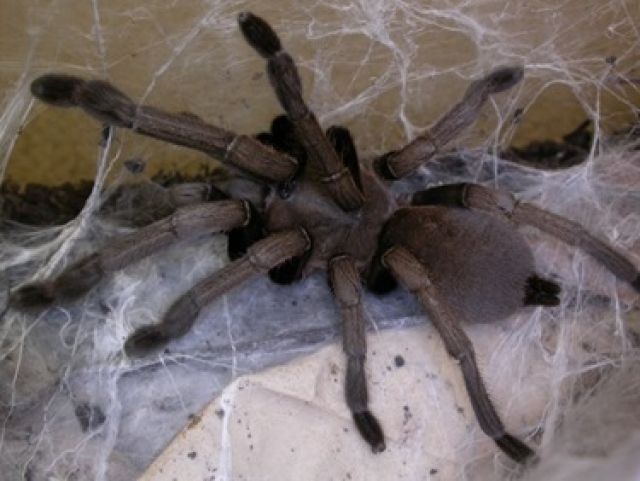 These sneaky spiders make a hissing sound that will send a shiver down your spine.

They are large, hairy and very scary and will definitely be creepin’ it real this Halloween.

These spiders are grey or brown and have incorrectly been called bird-eating spiders. (The fact is these spiders rarely eat birds, just people. Only kidding!)

Unfortunately, because people are so fascinated with them, many are taken from the wild and sold as pets, greatly depleting their numbers. Australia has seven described species but a number remain to be named.

They can dig a burrow two metres long, but this hasn’t been enough to save them with up to 10,000 tarantulas stolen from the wild (mostly in Queensland) each year.

For biodiversity reasons, this spider is very important and should not be illegally removed from its natural habitat, the same as any other species.

So before you go to bed this Halloween night, you might want to double check there aren’t ghost bats or Whistling tarantulas under your bed...

If you just can’t get enough of our spiders and need an idea for your kids this Halloween, download a Queensland Museum spider mask.

View more information on ghost bat and tarantulas, including where they live in Queensland.