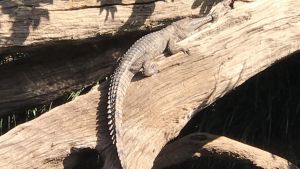 DES wants to know who taped the crocodile's mouth shut

The croc was seen on the Mitchell River near Mt Carbine

The Department of Environment and Science (DES) is appealing for public information following a recent report of a freshwater crocodile swimming with its mouth taped shut in the Mitchell River at Mt Carbine.

On 28 October 2020, a member of the public reported the crocodile swimming in the river near the Cooktown Road crossing to the RSPCA and provided the agency with a photograph.

The RSPCA passed the report and photograph on to DES for investigation. After viewing the photo, DES wildlife officers believe it is a small freshwater crocodile.

DES wildlife officers will seek to locate and capture the animal so they can remove the tape and release it back to the wild.

Members of the public are advised not to approach the crocodile or try to attempt to remove the tape themselves. Instead, anyone who sees the crocodile is urged to call DES on 1300 130 372 and report its location.

It is an offence under Section 88 of the Nature Conservation Act 1992 to deliberately interfere with, harm, or kill a freshwater crocodile – with a maximum penalty of more than $30,000.

Members of the public are encouraged to report any crocodile sightings as soon as possible, by calling 1300 130 372. DES investigates all reports it receives.

Freshwater crocodiles are smaller and pose considerably less threat to humans than estuarine crocodiles. They are generally timid creatures and have a diet consisting mainly of small animals such as insects, fish, frogs, lizards, turtles, bats, and waterbirds

However, like many wild animals, freshwater crocodiles may become aggressive if they feel threatened or cornered, and people are encouraged not to approach the animals if they see them in the wild.

If left alone freshwater crocodiles generally pose very little danger to the community. They can be distinguished from estuarine (or saltwater) crocodiles by their smaller body size and narrower snout.