Twelve turtles returned to Reef thanks to partnership

Turtle being released back into the Great Barrier Reef. 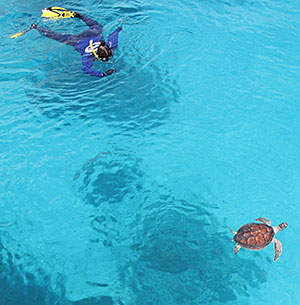 One of 12 green turtles released into the waters of John Brewer reef which is in waters off Palm Island.

Dr Mark Read from the Great Barrier Reef Marine Joint Field Management Program (RJFMP) for the Marine Park Authority and DES said the turtles were collected during an afternoon nest emergence on Heron Island back in 2017.

“What that means is the hatchlings were visible to daylight predators and therefore easy food for seagulls, fish and sharks,” Dr Read said.

“We collected what we could, saving these 12 turtles from certain death alongside their siblings.

“Sadly we could not save them all, but these 12 turtles are now bigger and back in the ocean.

“They are no longer bite-sized snacks and have survived a really high risk phase of their lives.”

The Queensland Department of Environment and Science is proud that its partnership through the Reef Joint Management program was helping save turtles and provide valuable research opportunities.

The turtles were released at John Brewer reef which is in waters off Palm Island. To get there, Queensland Parks and Wildlife provided a vessel and Dr Ian Bell from the Threatened Species Unit oversaw the operation.

The department is pleased to have been able to play a part in returning these twelve turtles to their natural habitat – twelve turtles that would almost certainly not have survived had it not been for the hard work and dedication of the teams.

This operation is just one small part of the broader RJFMP– it is a partnership that stretches back many years and continues to go from strength to strength.

For example, it was because of this partnership approach that we were able to save the many turtles stranded and injured following Cyclone Yasi in 2011 where things such as vessel transport and care facilities were in daily demand.

Associate Professor Ellen Ariel from James Cook University said during their time at JCU the turtles supplied information for 23 separate studies - some regarding the immune system, others genetics and others again about behaviour and welfare.

“They have contributed plenty to science and for that we are truly grateful,” Associate Professor Ariel said.

“The release occurred on a clear day with flat seas, which made for perfect conditions.

“The turtles spent some initial moments getting used to their new surroundings.

“They then slowly swam away from the boat, taking their time to look around.

“Eventually they all dove down to the reef, with one turtle observed to start feeding at a depth of six to seven metres within five minutes of release.

“For the researchers and the team it was a deeply rewarding experience.” Vision of the turtle release can be downloaded.