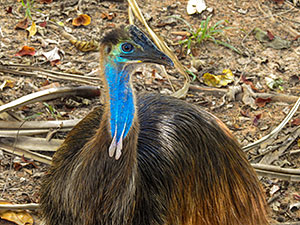 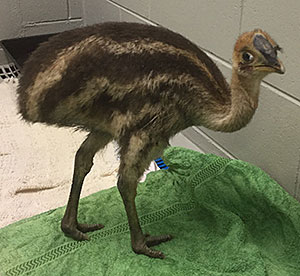 As the Christmas holidays approach, it is important not to be lulled into a false sense of security by the majestic beauty of our wet tropical rainforests.

There are ancient gems in the rainforest, in the form of a dinosaur-like bird – the iconic blue, black and red southern cassowary that can grow to up to 1.8 metres high.

Southern cassowaries are throwbacks to the dinosaur era and are perfectly designed to live in their rainforest environment and for their ecological role as ‘rainforest gardener’.

The World Heritage Ares wet tropical rainforest is estimated to be 180-million years old, and as the oldest continuously surviving rainforest on earth.

The rainforest largely has cassowaries to thank for its longevity and vastness, as they eat rainforest fruits (some of them poisonous to other animals) and disperse the seeds in their droppings throughout the forest.

They do this over vast areas, which has allowed the rainforest to regenerate and maintain itself over the ages. The cassowary can leap up two metres to reach for fruit from forest trees.

Cassowaries are thought to have evolved about 60 million years ago and share some characteristics with dinosaurs, including their three-taloned feet and their respiratory systems.

There is nothing better than seeing a male cassowary nurturing his chicks in the forest, but if you are lucky enough to have this experience, there are important steps you should take to keep both you and the cassowaries safe.

In particular, don’t approach cassowaries or stop your car beside them, as male cassowaries are unpredictable and will defend their chicks. Cassowaries have sharp talons and can inflict serious injuries by lashing out with their feet.

Some cassowaries associate people and cars with food, so parking near these animals to get a better view can encourage them onto the road, and place them at risk of being hit by another car.

The southern cassowary is listed as endangered in the Wet Tropics region, with an estimated 4400 cassowaries remaining in the wild.

The Queensland Government allocates over $500,00 each year to support cassowary rescue and rehabilitation in the Wet Tropics region, and has established a well-equipped cassowary rehabilitation centre at Garners Beach, which is operated by the not-for-profit Rainforest Reserves Australia (RRA) and its volunteers.

If you’re holidaying or driving in far north Queensland this Christmas, please slow down. And if you’re in the tropical rainforest, please be aware that cassowaries may be out and about gardening in the forest near you.