Share the love, not your rubbish, on Australia Day 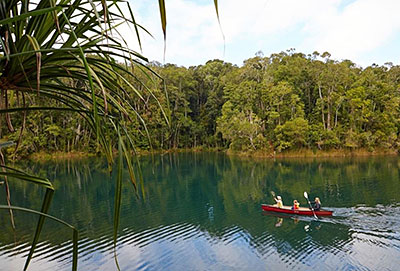 Experiencing what the unique Atherton Tableland parks and forests have to offer is a great way to spend the Australia Day long weekend.

Queensland Parks and Wildlife Service Ranger in Charge Mark Lawson said everyone was welcome at the Tableland’s parks and forests.

"If the weather is good, we expect large numbers of locals and overseas visitors at Crater Lakes National Park and Danbulla State Forest," he said.

"Lake Eacham is cool and inviting for swimmers, while over at Lake Tinaroo the water levels are good and waterskiers will be out in force there."

Mr Lawson said rangers and Police would be conducting extra patrols over the long weekend.

"Most people look after this World Heritage Area and respect other visitors, however there have been occasions in the past where anti-social behaviour has discouraged families and tourists from returning to this beautiful area.

"That is why rangers will be working with Queensland Police and focus on patrolling treasured places like Lake Eacham and Lake Tinaroo.

"We encourage everyone to respect the natural values that make Lake Eacham a national park. Leave pets at home, remove litter, and don’t take food or drinks onto the lake."

"Rangers can issue $261 on-the-spot fines for littering, which includes cigarette butts. Smoking is not permitted in day-use areas or camping areas of national parks.

"There’s no camping at Lake Eacham, and camping permits are needed for Danbulla," Mr Lawson said.

"People can book at www.qld.gov.au/camping. A permit only costs $6.55 per person per night, or $26.20 per family per night. Rangers will be checking campers’ permits.

"Police will be showing their support, patrolling and running random breath-testing of motorists.

"It’s a privilege to have these places – let’s look after them and encourage others to do so, year-round," Mr Lawson said.

Senior Sergeant Kyell Palmer, Officer in Charge, Atherton station said police would be conducting high-visibility operations over the Australia Day weekend with staff from Atherton, Yungaburra, Malanda and the Road Policing Command to assist in policing the Tinaroo and Lake Eacham areas.

Snr Sgt Palmer said Police would conduct joint patrols with QPWS to detect and prevent anti-social behaviour. Fines of up to $783 apply for committing public nuisance offences as well as potential court appearances.

Police are also urging motorists to be aware of the "fatal 5" driving behaviours and not engage in behaviour that puts other road users at risk. Police will be establishing multiple random breath testing sites across the tablelands over the long weekend.