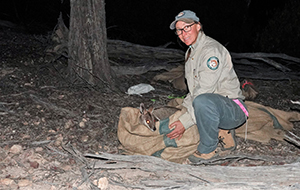 Tracy Wattz is Ranger in Charge, Northern Mulga, in the South West Region of QPWS. Being a part of the natural world was important to Tracy from a very young age. Loving endless time in the Gippsland region, she spent hours with her uncle, a naturalist, walking the upper reaches of rivers, exploring forests—admiring and taking grace and strength from nature. Being a Ranger wasn’t something she ‘decided’ to become. Following her heart led her out west into semi-arid landscapes where she fell in love with the wide-open spaces, red earth, blue sky, many shades of greens … and a beautiful soul.

Western Queensland landscapes are timeless, hot, harsh, and yet so astonishingly beautiful. I started in Charleville, working on Chesterton Range, Tregole and Mariala national parks, and then surrounding national parks such as Currawinya and Lake Bindegolly. I then enjoyed time in the central west region based in Longreach, working as a natural resource Ranger across Astrebla, Welford, Bladensburg, Lochern and Idalia national parks.

I was fortunate to have worked alongside my partner, the late Peter McRae. Assisting with long-term bilby research on Astrebla Downs, spending many hours spotlighting, ground-truthing bilby burrows and establishing monitoring sites. Your heart certainly skips a beat when you see your first bilby in the wild!

Mariala National Park is one of a few locations which supports two small groups, from the last captive colony, of yellow-footed rock wallabies, which were released in September 2020 from the Charleville based threatened species program, originally managed since 1983 by the late Peter McRae. The sub-species is listed as vulnerable and has a restricted distribution range centred on the northern Grey Range between Blackall, Quilpie and Windorah. Our parks crew, alongside the Threatened Species Team, assisted with capturing, conducting health assessments, transporting and releasing the yellow-footed rock wallabies. We micro-chipped and ear-tagged all wallabies for monitoring after release. We also assessed sites for food, water availability, and low numbers of predators; and set up field cameras to monitor wallabies—data we provided during the first six months of the release. It’s a wonderful feeling returning these wallabies to the wild!

What is your most memorable moment as a Ranger?

Being part of flora and fauna surveys and contributing to gathering species lists across the western parks. Collecting and identifying plants, running pitfall lines to trap reptiles, mammals, amphibians, insects, and spiders. Setting up harp traps to catch and identify bats, wading through waterholes setting traps in the rivers to identify the aquatic critters and enjoying the dip!

After the sun drops away and heat from the day starts to subside, covered in dust, smiles all round, you begin to feel relief come over you. A dip in Spencers Waterhole in Hell Hole Gorge NP leaves you feeling replenished. With permanent waterholes along deep stony gorges, it’s the place to be for sunset, as you watch the last rays of sun light up the rock walls, changing hues of red into orange as they fade with the day. Very peaceful!

Western Queensland landscapes are timeless, hot, harsh, and yet so astonishingly beautiful. The parakeelya (Calandrinia balonensis) growing on stony soils, the knarly bendee (Acacia catenulata) on rocky escarpments, the diversity of plants and animals existing on the edge, the boom and busts, the hidden waterholes far from anywhere. The peace. Wandering across the vast open spaces, you find yourself feeling like you’re standing in an inverted bowl, where the sky feels bigger than the landscape you’re standing on, and the night sky twinkling with a million stars, is a unique experience One of the best parts about working as a Ranger is sharing, with travellers, the magic of the semi-arid lands. How to look for natural beauty, in what seems to be an unforgiving place—inspiring a greater appreciation of the diverse environments we live in.

If you are planning a trip out my way, be safe and plan your trip to the more remote parks—they are seasonal—and help can be hours away. Be sure someone knows where you’re going and when you’re returning and ensure you have plenty of food, water, and fuel. Don’t be in a hurry; you never know what natural wonders you’ll discover.