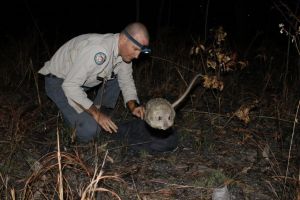 Rob Miller is Ranger-in-Charge based in Mareeba on the Atherton Tableland in North Queensland. Initially his goal was to become a Forest Ranger so he attended Gatton Agricultural College and obtained an Associate Diploma in Forestry. Rob worked in forest management for Queensland Forestry from 1994 until 2002. Then a restructure saw many of the state forests and forests reserves that Rob was managing move across to the Queensland Parks and Wildlife Service. Rob, along with many other forestry staff, also made the move. It was not an easy transition but one he realized was necessary and, in retrospect, very much welcomed.

Why did you decide to become a Ranger?

I decided to become a Ranger for the reason most of us do and that is to work outside, make a positive impact on the natural world, and learn and do some cool stuff.

I have worked mainly around the Atherton Tableland and Wet Tropics districts in North Queensland, on parks and forests including Davies Creek, Dinden, Danbulla, Kuranda, and Hann Tableland. I’ve also worked on other parks in the Wet Tropics such as Mount Windsor, Mount Lewis and Wooroonooran. Over the last five years we’ve seen some new acquisitions come to the Dry Tropics such as Wairuna, Littleton and Rungulla. I’ve spent some time at these parks and enjoyed the varied and interesting work they have to offer.

There are so many and varied memorable moments, from aerial burning in eastern Cape York Peninsula and seeing the hoop pine emergents of the rainforests of the McIlwraith Range (Kulla NP) from the air, to coming across an illegal mobile meth amphetamine (ice) lab in production on a road in Dinden NP. Both experiences have left vivid memories, which I’ll never forget! As a Park Ranger the thing I get the most consistent pleasure from is walking cross-country in parks and forests that are managed well for fire and pests, where not too much is out of place. These parks and forests are such a pleasure to walk and work in! As a citizen, my favourite experience is getting out on trails and tracks that I’ve not seen or been on for a long time, and discovering new little treasures such as huge trees or out-of-the-way waterfalls.

The best thing is the opportunity to be inquisitive about the natural environment—learning about, and from, nature, while presenting the park or forest to the community who enjoy the area you help manage.

Do some homework on where you’re walking, such as distance, topography and vegetation type. Phone the rangers or local bushwalking club to ask about highlights before going and always have spare clothes, a jumper and leech repellent in the car!

Don’t over-think it! ‘Less is more’ but make sure you have plenty of the basics, such as food, water and time.