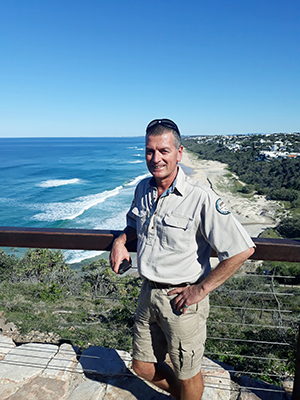 Omar Bakhach is a Principal Ranger in the South West Queensland Region, based at Roma. While volunteering for a cassowary conservation group in Mission Beach in the late 1980s, and showing his father-in-law around the rainforest, an ‘off the cuff’ comment—“You’d make a good ranger!”—set him on the path to becoming a Park Ranger. Omar was accepted as a mature age student into University of Queensland, Gatton Campus, then won a position with the then Queensland National Parks & Wildlife Service (QNPWS) in Toowoomba…the rest is history.

It was in the early 90’s, where I initially had some short stints working and volunteering around the Lake Eacham and Mission Beach area in Far North Queensland, then scored a job working on YCC park projects at Ravensbourne and Crow’s Nest Falls National Parks near Toowoomba.

In the mid-90s, I worked for Marine Parks based out of Cairns undertaking operations and compliance duties on the Great Barrier Reef Marine Park, and on island national parks between Dunk Island and the top of Cape York Peninsula.

I then went from Marine Parks, to the Ranger in Charge position at Central Station on K’gari (Fraser Island), Great Sandy National Park, World Heritage Area, for a couple of years.

Then one day, a phone call from the Regional Manager Sunshine Coast, gave me the opportunity to relieve in the Ranger in Charge Noosa National Park position. Not long after that, the Noosa position became permanent. I subsequently became Senior Ranger for the Sunshine Coast coastal area based in Maroochydore, which included the key national parks of Noosa, Mt Coolum, Tewantin National Park, Eumundi Conservation Park, and Tuchekoi National Park (home of the Pomona King of the Mountain foot race).

I have so many memorable moments from my work with QPWS over the years but I have to say that the far northern boat patrols on the Great Barrier Reef with Marine Parks in the mid-1990s were a highlight! On these trips between Cairns and the Torres Strait, our tasks were very diverse and we had the privilege of experiencing the sheer beauty of some of the most remote parts of the Great Barrier Reef islands, coral cays, reefs and Cape York Peninsula.

We did flora and fauna surveys of islands and reefs, scuba dived and snorkeled almost pristine coral reefs. We also assisted with ‘rodeoing’ and tagging of marine sea turtles and surveys for crown-of-thorns starfish, along with compliance work, moorings maintenance and infrastructure maintenance on remote islands.

Much of our work was in conjunction with local Traditional Owners such as Djabugay and Kuku Yalanji around Cairns and Mossman, as well as communities of Cape York.

I also provided interpretive talks about Marine Parks to local schools in Cairns, worked with awesome community and student volunteers, and scientists, and assisted documentary filmmakers… It really was a special part of my working life that I look back on very fondly.

Most recently, I undertook a vehicle trip through Currawinya National Park in the far southwest of the state of Queensland. The vastness of the ecologically and culturally rich landscape which also includes ancient mound springs, and the ever changing colours throughout each day, as well as the rich Aboriginal heritage of that area was captivating.

As we drove the vast network of tracks, the vegetation communities and landscape were constantly changing. Just knowing the management challenges facing the rangers out there such as the remoteness of the country, and what a great job they do, was very rewarding for me.

The best thing about working as a Park Ranger is feeling like you are a real part of the community, and managing a community asset that hopefully will be around in as good (or better) condition in years to come, for future generations.

Be prepared! Do a little reading up about where you’re going. Carry a small backpack with water, snacks, a torch and a basic first aid kit. If you are walking in a remote location and you own a GPS tracking unit, TAKE IT…. or maybe hire one. Most of all switch off from your ‘daily grind’. Take time to stop, breathe and ‘feel’ the environment around you….. Don’t race through your trip!!

If you come to a relatively empty camping area, don’t set up your camp right next to the only other camp there! Also clean up around your site (and beyond) thoroughly when you pack up. Respect other campers!