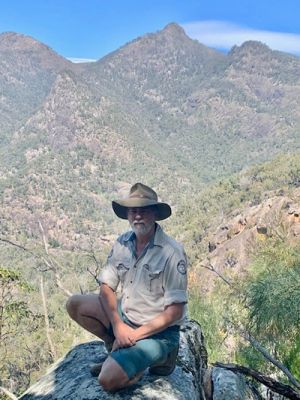 Justin O’Connell is Ranger in Charge, based at Boonah. With 37 years under his belt, Justin has extensive experience in managing natural places.

Mount Barney is an extremely rugged park, the wild remoteness is beautiful. It is home to the Gondwana Rainforests of Australia World Heritage Area that is home to many rare animals, plant species and communities.

What is your most memorable moment as a Ranger?

There have been so many special moments and experiences. The amazing variation in opportunities I’ve had by working in very different natural areas. From the sandstone gorges and cliffs of the Carnarvon ranges to the beaches, perched lakes and coastal vegetation on the largest sand island on the planet, to the sub-tropical rainforests of Lamington and then the rugged peaks and bushwalkers mecca that is Mount Barney—I’ve been a Ranger here now for 28 years, so you could safely say it’s a favourite.

A highlight for me as a Ranger was the first time I went up in a helicopter to conduct aerial ignition during a prescribed burn at Mount Barney. Being an extremely rugged park accessible only on foot, it gave me a whole new perspective of the park from the air, which not too many people get the chance to experience.

Make sure you choose activities that suit the skills, experience and fitness of your group. Always check the weather before leaving, as mount Barney’s peaks are often in cloud and temperatures can drop suddenly.