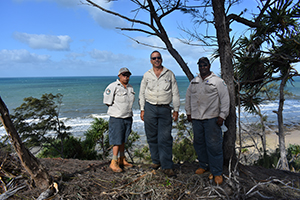 Hank Schinkel is a Ranger with the Queensland Parks and Wildlife Service based in Townsville. Hank has always had a passion for looking after the environment, so right out of school he set his sights on becoming a Ranger.

In New Zealand I worked in Tongariro National Park, in central North Island based around three major volcanoes. I absolutely loved it there working with volcanologists. I also worked in Westland Tai Poutini National Park on the west coast of the South Island, a coastal to the alpine park; and Nelson Lakes National Park.

I was very keen to work with First Nations people. So, in The Northern Territory, I worked in Uluru-Kata Tjuta National Park, which was very remote and, for family reasons, moved to Kakadu National Park after two years.

Cradle Mountain – Lake St Clair National Park, was where I spent most of my years as a Ranger in Tasmania. In Queensland, I was acting Ranger in Charge at Rinyirru (Lakefield) National Park (Cape York Peninsula Aboriginal Land) located about 340km north of Cairns and recently I relocated back to Townsville to work as an Asset Ranger.

Rinyirru (Lakefield) National Park (Cape York Peninsula Aboriginal Land) is such a vast expanse. For me, it has to be the wetlands during the wet season with the abundant bird life; and seeing the contrast in the landscape between the dry and wet – absolutely amazing!

What is your most memorable moment as a ranger?

It is really hard to put a finger on any one moment! The opportunities to work on Country and in different areas back in New Zealand were special. Working with Traditional Owners at Kakadu and Uluru, and having my family be able to experience this, was a major highlight—going out looking for bush tucker with the elders, my family and the kids just loved it!

An experience which always stood out to me, was after finishing work in Kakadu. We were flying back near the escarpment and this rain cloud came through—we were just flying right beside this curtain of rain while next to the edge of the escarpment. It was a moment that you could never anticipate or recreate again.

Just before I left Kakadu, one of the Traditional Owners wanted to take me on Country and he introduced me to Country. He took me to one of the sites… and the artwork. I’ve never seen artwork like that anywhere else. He was talking to me about the stories and what they meant to him. To me, that was so special, and some of those stories I can’t repeat again. I never have and never will, because the whole of that knowledge belonged to him. You just never forget experiences like that – seeing the connection he had for Country, for land and for the stories.

Just recently, my wife and I hiked the Thorsborne Trail on Hinchinbrook Island National Park. Honestly, I was blown away by the variety within the track, and I just loved it. It’s one of best walks I have done, and I’ve done a lot of walks in Tassie and other places. Rain during the night—beautiful days—we hiked it over five days. So, we didn’t have to rush, and we thoroughly loved the variety.

I have worked in a number of National Parks. What really makes it for me is the staff that I work with. We work in these amazing environments and it’s the people that I work with that actually make it so special in the end; they all have the same goals about how they want to protect and manage the environment. Presenting the park to visitors is also something that I really enjoy.

Preparation and don’t underestimate the crocs!. We are in a remote area, you have to be self-sufficient and make sure you allow sufficient time for your trip. Do your planning and background research on the park.